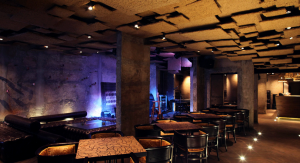 LONDON– 4M Group, a design and build architecture practice based in London, is among the final five contenders for this year’s international World Architecture News Awards (WAN) with HAMAM – a subterranean jazz bar in Prishtina, Kosovo.

THE WAN Awards, now in its fifth year, is a major annual international competition that celebrates and promotes the best of fourteen categories, divided into: Interior Projects and Products. A fierce competition awaits candidates annually as the Awards receive more than 1,300 entries from the world's top architects and designers, making it the largest international architecture awards programme in the world.

This year, the competition received upwards of 250 entries in the category for Best Bar Design. From there, the list has been narrowed down to five finalists.  4M’s HAMAM is up against the following: Electric in Paris, France, designed by Since 1974; Erlkönig in Insbruck, Austria, designed by ATP Sphere GmbH; Northern Lights Bar at the Ion Hotel in Reykjavik, Iceland, designed by Minarc; and Wasbar in Gent, Belgium, designed by Pinkeye.  The shortlist is available to view at: http://www.worldarchitecturenews.com/interiors/. Click on “Bars” to be taken to the shortlist.

The brief for the awards were to show how the designs addressed key elements of the client brief, as well as to explain how the design has used an innovative approach to integrate and enhance its context within its environment/community.

For HAMAM Jazz Bar, the CEO of 4M Group, Perparim Rama, said that his team focused on both the sustainability aspect of the local community, as well as on the local economy in order to create the venue. The building was constructed using mostly local materials, and the project employed local craftsmen, and used basic materials native to the area  such as wood, straw, metal, mud, and concrete.

Rama said, “We wanted to create an environment that is both unique and true to its surroundings, something that emerges from the local community and is built by the people in its entirety, from the rustic metal grand entrance doors aged from the earth to the mud panels floating on the ceiling above.”

Winners of the WAN Award will be announced in front of a large audience from the development, architecture, interior and product design sectors at an exclusive evening Awards Ceremony at the Saatchi Gallery in London on Thursday, 28 November 2013.

All entries are published on the WAN website, which receives approximately 10.82 million online visits per month. Officially launched on 29th September 2005, WAN is now the world's leading supplier of news to the global architectural community. In March 2007 the website reached the prestigious No.1 position in Google for "architecture news", and has remained in pole position since.

Founded in 2004, 4M Group is comprised of accomplished architects, designers, builders and planners whose realm of expertise extends beyond residential projects to include retail, hospitality and urban mixed-use designs. 4M is a thriving organisation delivering contemporary and complex solutions across private and public sectors, both UK-wide and internationally. The company places an absolute importance on ecological responsibility to both the environment and surrounding communities, whilst acknowledging the impact of space on human emotion and well being. The cornerstone of 4M’s team and practice philosophy is the effective understanding of the needs of the client.

4M Group has celebrated numerous successes in the recent past, being the first to represent Kosovo last year in the Architecture Biennale in Venice Italy, as well as notably winning the award for Architectural Innovation by the Kosovan Architectural Association, and having been named as one of the Top 50 eco-sustainable firms in the UK by Open Cities in 2009.