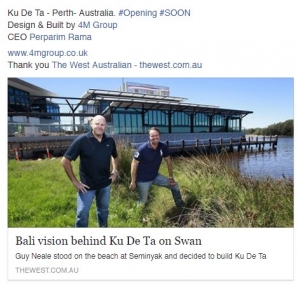 Guy Neale recalls standing on the beach at Seminyak in Bali and deciding to build Ku De Ta.

That was 1999. A year later the iconic Bali beach club and restaurant was built.

“I stood on this site on the Swan River and I just knew it was right. When we decided to build at Seminyak we were surrounded by rice paddies and everybody warned me that it wouldn’t work.

“It was the same here. I was told ‘Perth is too small, there’s not enough population, you’re 10 years too early’. I didn’t agree.”

Scores of tradies are scrambling to put the finishing touches on the sprawling restaurant and bar facilities ahead of a series of “friends and family” nights beginning next week.

The restaurant will officially open after a gala, A-lister launch on March 16.

Construction of the complex, which contains two other large restaurants and a function centre, is understood to have cost about $25 million.

Ku De Ta has spent almost $6 million on its fit-out.