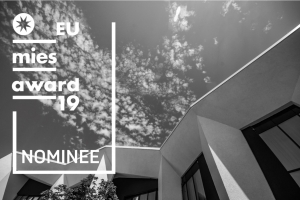 London | Prishtina – 07/11/2018 4M Group is delighted to announce its nomination for the European Union Prize for Contemporary Architecture – Mies van der Rohe 2019, one of the most prestigious architecture prizes in Europe.

The EU Mies Award is granted every two years by the prestigious Fundació Mies Van der Rohe (Barcelona), jointly with the European Commission. The award seeks to recognize and reward quality architectural production in Europe, while also drawing attention to the contribution of European professionals to the development of new ideas and technologies. The EU Mies Award presents itself as a tool to better understand the cultural role of architecture in the construction of our cities.

The nominees have been selected by a large group of independent experts from all over Europe, representatives from the European Council of Architects and other European national architects’ associations.

The nomination of 4M Group has been granted thanks to the project ‘H House’, built in 2016 in the outskirts of capital Prishtina, in Çagllavica. A radical opposition to the urban landscape of Prishtina’s monotonous, beguiling assortment of dense concrete blocks and copy-paste spaces, the Humolli House is monumental through the sheer force of its choreography of light.

The strength and dynamism of the Humolli House structure results in a dramatic architectural creation that has become a living symbol of confidence in an environment striving to find itself.